The Japanese-owned ship, MV Wakashio, ran aground at Pointe d’Esny in late July. A massive clean-up operation has been launched from the shore since oil began leaking on Thursday, with thousands of local volunteers heading to the eastern side of the island nation to help.However some on the ground said Tuesday that new cracks had appeared — and if the ship broke up, thousands more tons of fuel would be released into the lagoon.”The way the leakage and the break in the ship are increasing, there is huge probability that this ship will break into two. And we still have around 2,500 metric tons of fuel on the tanks of the ship,” said Sunil Dowarkasing, a former strategist for Greenpeace International and former member of parliament in Mauritius.

The spill is close to two environmentally protected marine ecosystems and the Blue Bay Marine Park reserve. Nearby are a number of popular tourist beaches and mangrove plantations.Vikash Tatayah, conservation director of the Mauritian Wildlife Foundation, said teams have been working to save the many different species of plants and wildlife from a nearby island, Ile aux Aigrettes. 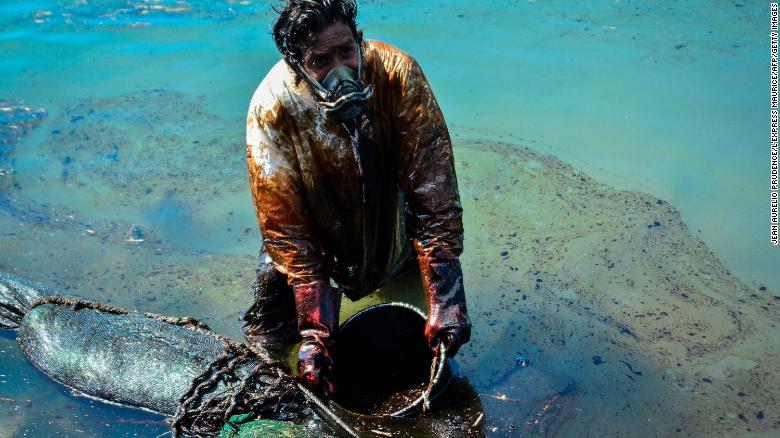 A man scoops leaked oil from the vessel MV Wakashio, that ran aground near Blue Bay Marine Park on August 8, 2020.”We actually removed thousands of plants that were in the nursery and we have moved fruit bats that were captive on the island. We’ve also taken off a small number of threatened birds,” Tatayah said Tuesday.The oil has seeped into Mahebourg Lagoon, a scenic spot known for its turquoise waters. Rejuvenation efforts have been ongoing in this area since 2001, when the government banned sand extraction from the lagoon. Dowarkasing said marine life had returned and corals were slowly growing before the spill.”With this oil spill we may lose that again,” he said. “There will be mass damage to the marine ecosystem.” 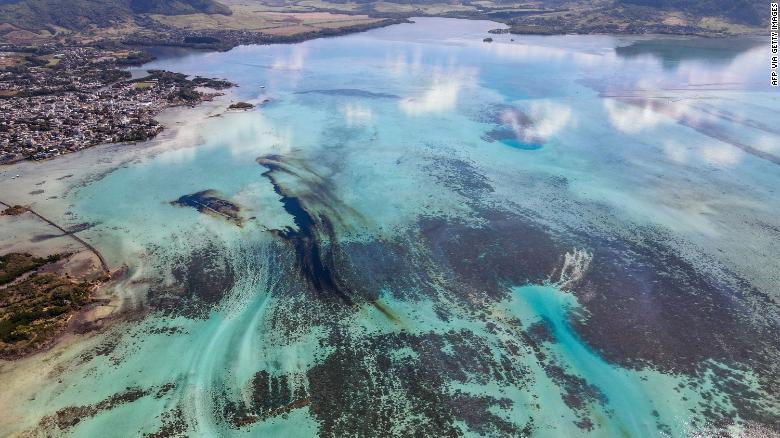 An aerial view shows a large patch of leaked oil from the stricken vessel near Blue Bay Marine Park.Conservationists at the scene say it is too early to assess the extent of environmental damage and want the government to conduct proper assessments.Concerns are also growing for the thousands of local people whose livelihoods will be impacted by the spill. The island relies heavily on fishing and tourism, and was already affected by the coronavirus pandemic putting a halt to international travel.”People are furious that this has happened,” said Tatayah. “Thousands and thousands of people who work in tourism will be badly affected by this wreak.” 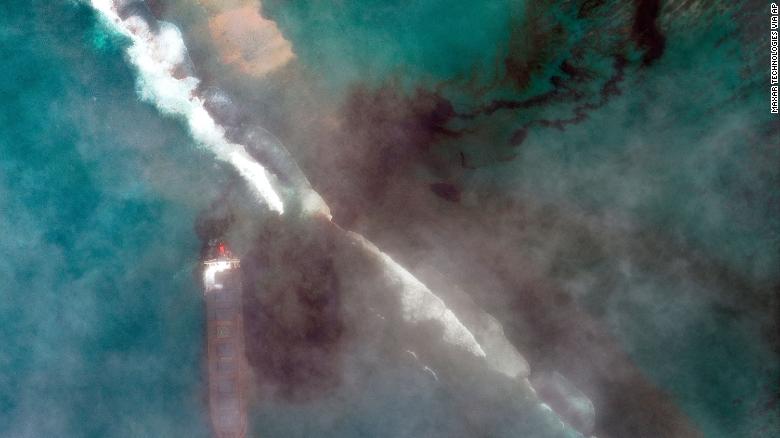 In this satellite image provided by 2020 Maxar Technologies on Friday, Aug. 7, 2020, an aerial view of oil leaking from the MV Wakashio.On Saturday, French President Emmanuel Macron said France was deploying teams and equipment from the nearby island of Reunion in response. Japan’s Foreign Ministry also said a six-member team from Japan Disaster Relief had also been dispatched to help with the response “upon the request” of the Mauritian government.

The MV Wakashio is a cargo ship operated by Japanese company Mitsui OSK Lines. It was on its way from China to Brazil when it ran aground on the reef on July 25. Last Thursday, the ship began leaking oil into the ocean.”Due to the bad weather and constant pounding over the past few days, the starboard side bunker tank of the vessel has been breached and an amount of fuel oil has escaped into the sea,” the ship’s owners Nagashiki Shipping said in a statement to the operator Mitsui OSK Lines on Friday. 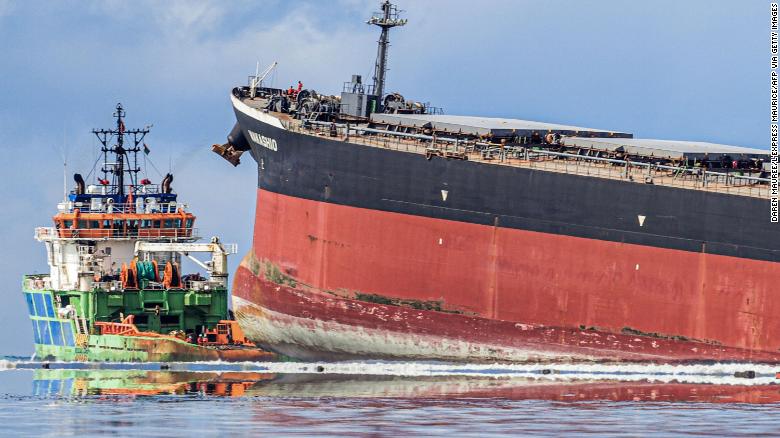 Workers look from a ship towards the vessel MV Wakashio that ran aground.The company said it had contracted a “specialist oil response and salvage team” to work with Mauritian authorities.”Nagashiki Shipping takes its environmental responsibilities extremely seriously and will take every effort with partner agencies and contractors to protect the marine environment and prevent further pollution,” the statement said.In an updated statement on Tuesday, Mitsui OSK Lines said about 1,180 metric tons of oil had leaked from the vessel’s fuel tank — with about 460 tons manually recovered from the sea and coast. The ship was carrying about 3,800 tons of Very Low Sulphur Fuel Oil and 200 tons of diesel oil, according to the operator. 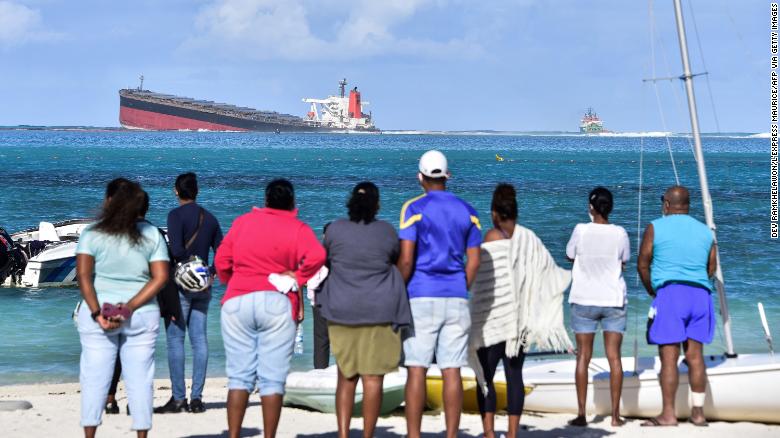 Bystanders look at MV Wakashio near Blue Bay Marine Park in Mauritius.Mitsui OSK Lines on Tuesday confirmed that the crack inside the hull of the ship had expanded, adding: “Since this ship is unable to navigate by itself, it is moored to a tugboat so that it will not drift even if it is broken.